Fears of the economic effects of Corona Virus caused the S&P 500 to fall over 33% in about a month.  March 23rd marked the low of the selloff – the S&P 500 has rallied an impressive 30% since then*.  After an amazing rally from the recent lows, many investors are wondering – what now?

Preface: Before I jump in to speaking unemotionally about the stock market, let me first say that this is a terrible global tragedy and my heart goes out to those who have lost their jobs or even lost loved ones to this terrible virus.

There is a laundry list of reasons why the market should be much lower.  Lets list a few:

Its pretty clear that all this bad news boils down to the FACT that US Gross Domestic Product (GDP) will be negative this year which will give us our first recession since 2008/2009.  I agree with this statement, but should we sell stocks because of it?  Lets look at past stock market returns in years where GDP has declined (FROM THE ST. LOUIS TRUST COMPANY. DATA FROM FRED AND S&P). 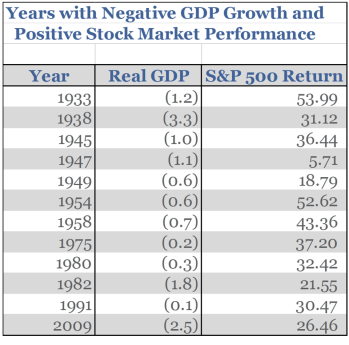 Those are great returns!  So, why would the stock market rise when GDP is contracting?  Its because the markets are forward looking and most likely PRICED IN the declining GDP BEFORE it happened.  2008 is the best example because most of us lived through it. Markets were down significantly in 2008 which priced in the negative 2.5% GDP of 2009 and much much more.  When the worst case scenarios did not come to pass, markets rallied in 2009 in spite of a contracting economy.  Did the recent 33% selloff in the S&P 500 appropriately price in the GDP decline that is certainly coming?  Only time will tell.  But if your reasoning for selling stocks is that the economy is going to contract, then you may want to rethink your thesis.

Another reason to be bearish stocks is because the news is going to get worse.  Possibly a lot worse.  Traders react to headlines and the headlines are going to get worse which will cause the markets to drop again.  Fair enough.  Lets take a look at this “headline” chart from Vanguard which starts at the market low in 2009, but shows the value of a million dollars invested in the S&P 500 at the market high in 2008.

The two headlines that jump out at me are job losses topping out at 5 million and home foreclosures hitting a record high.  The stock market did not wait for the news to get better before starting a huge rally.  If you waited for job losses to peak or for foreclosures to peak then you missed a huge portion of the rally.  Things got much worse in the underlying economy while the stock market staged a huge rally.  Does that sound familiar?  My point is that the headlines can and will get worse from here but it does not mean that the stock market has to get worse.

Maybe the US markets will crash again, maybe they won’t.  But I think the prevailing thought today among investors is that the stock market HAS to go lower and that there is no reason why it should be as high as it is today given all that is happening.  What history shows us is that the US stock market certainly CAN go higher when the economy is shrinking and it certainly CAN go higher when the headlines are certain to get worse.  Something to keep in mind.

**The above article is informational in nature only and is not a recommendation to buy or sell securities.  All information is gathered from sources believed to be reliable, but neither Charles Brown nor Ausdal Financial Partners, Inc guarantees the accuracy of the information.  All investments carry a degree of risk.  Individuals should consult with their tax and investment professionals before making changes to their investment portfolios.

One thought on “What Now?”

Securities and Advisory Services offered through Ausdal Financial Partners, Inc., an SEC registered investment adviser, member FINRA & SIPC. 5187 Utica Ridge Rd., Davenport IA 52807, 563-326-2064, www.ausdal.com. Sub-advisory services offered through M. Brown Financial Advisors, a registered investment adviser with the state of Illinois. M. Brown Financial Advisors is located at 2728 Forgue Drive, Suite 100, Naperville, IL 60564, 630-637-8600.  M. Brown Financial Advisors and Ausdal Financial Partners are unaffiliated entities and only transact business in states where they are properly registered, or are excluded or exempt from registration requirements. Registration of an investment adviser does not imply any specific level of skill or training and does not constitute an endorsement of the firm by the Commission or any state regulators. Ausdal Financial Partners, Inc. does not accept buy, sell or cancel orders by email, or any instructions by e‐mail that would require your signature. Information contained in this communication is not considered an official record of your account and does not supersede normal trade confirmations or statements. Any information provided has been prepared from sources believed to be reliable but does not represent all available data necessary for making investment decisions and is for informational purposes only.

Check the background of this advisor on FINRA’s Broker Check – https://brokercheck.finra.org/individual/summary/5511058